Heart Failure Awareness Day: a time to come together online?

Heart Failure Awareness Day is a day designed to raise the profile of heart failure among the general public, with particular note to its symptoms, need for a timely diagnosis and optimal treatment.

Across Europe, only 3% of people can properly identify the main symptoms of heart failure (HF) and many (incorrectly) think that HF is a normal consequence of ageing.[i]

Clearly it is important to raise awareness and understanding of the signs, symptoms and the seriousness of this condition. The Heart Failure Policy Network is a multidisciplinary group of politicians from across Europe working with patients, health professionals and other stakeholders to lead significant policy changes that may improve the lives of people with HF. The Health Policy Partnership acts as secretariat of the network, for more information, please see https://www.hfpolicynetwork.eu/.

HF Awareness day was a major milestone in the years’ activities for the HF Policy Network in order to raise awareness of HF and the need to create comprehensive policies. Working on the social media campaign, however, there were several key aspects of the day which may be preventing the messaging reaching the widest possible audiences. Which really, is what HF Awareness Day should be all about.

One of the first challenges that HF Awareness Day faces is the lack of cohesion and coordination of campaigns. In 2016, the day was held on 6th, 7th and the 8th of May in most countries, with in-person awareness raising events organised by national heart failure societies in hospitals and town centres. But the lack of one ‘unified day’ is a serious barrier wider impact of the awareness day.

Having one chosen day would allow for the different events to combine communications and publicity activities, which would surely be mutually beneficial for all the parties involved, allowing publicity and events to be mutually re-enforcing. This seeming lack of oversight and leadership in HF Awareness Day (not to mention the other 364 days of the year) just further enables this chronic condition to be neglected by policymakers.

Awareness day activities, for heart failure or any other health area, must be able to engage confidently with concise and interesting content online.

This timetabling challenge set aside, I was acutely aware how little occurred online. It seemed that the majority of the activities on social media were carried out by a small group of very dedicated HF advocates across Europe – most notably Pumping Marvellous Foundation, iHHub and the HF Policy Network Members. As people across the globe, particularly the young, [ii]  increasingly get their news and live their lives online, I find the lack of HF Awareness Day activity on social media from some of the biggest and most influential actors unfathomable. Awareness Day activities, be it for HF or any other health area, must be able to engage confidently with concise and interesting content online. A greater presence  of HF online will make a great move towards increasing the awareness of this often forgotten disease. 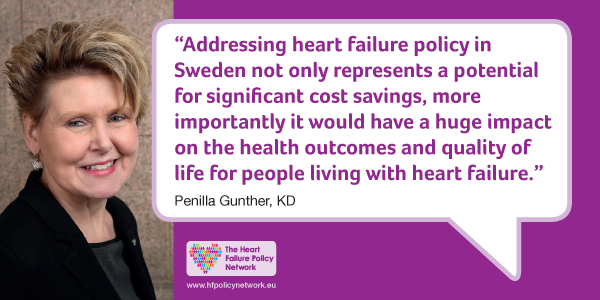 Social media activism and awareness raising activities often receive a significant amount of criticism – some campaigns deserve criticism and others less so. Certain social media health awareness campaigns provide little more than lip-service to a cause and with little in the way of information on the topic or any way where people can find out more, for example, changing the colour of a profile picture does not necessarily inform others about a cause. Without a way of linking the action on social media with information, it is difficult know what the new found ‘awareness’ actually is within the individual.

Yet, there are examples of fantastic campaigns which demonstrate how social media can reach a vast number of people in a short amount of time. Even a small show of support, such as the sharing of a simple graphic in enough numbers, can even help shift cultural norms.[iii] In our HF Awareness Day Campaign, we tried to always include evidence based suggestions and hard facts to engage and be shared on twitter. The most well received tweets were almost always graphical content which is easily shareable and contained interesting and sometimes shocking facts about HF.

Looking towards our next milestones, it is important to understand the remit of the HF Policy Network that awareness of the condition is necessary to drive policy change. Social media is a key part of the puzzle when trying to bring about greater awareness of HF at all levels of the healthcare continuum, from policy makers to the general public, who all have a part to play in the policy process. But it is vital that these different groups work together and mutually re-enforce activities to increase awareness of HF overall – which should be the ultimate goal. With greater leadership, oversight and cohesion we will #changeHFpolicy.

The opinions expressed in this blog are those of the author and do not necessarily represent the views of The Health Policy Partnership.