The Heart Failure Policy Network has launched a new summary report – The clinical management of heart failure: What is the state of play in Europe? – to mark Heart Failure Awareness Day 2017. 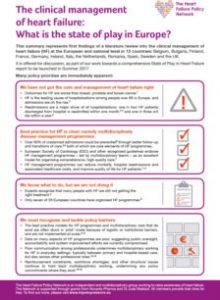 Based on a literature review across 12 countries in Europe, the report focuses on three topics:

Its key recommendations for policymakers are to define a national vision for multidisciplinary heart failure (HF) management programmes, to ensure transparency and accountability of those programmes, and to invest in sustainable models of care. The report is the second in a series on the state of play in HF. The first part, focusing on the diagnosis of HF, was published in 2016; the final report, on person-centred care and self-management, is due for release later this year.

Alongside the online launch of the new state of play summary from the Heart Failure Policy Network, various organisations took to social media to promote HF Awareness Day. Pumping Marvellous Foundation, a UK-based charity, organised a Thunderclap – a message about the causes of HF that was simultaneously sent, via various social media channels, to almost 270,000 people. Meanwhile, a Facebook live chat – hosted by Irish charity Croi in association with Keep It Pumping and iHHub – gave people living with HF an opportunity to participate in a Q&A session with doctors.

HF is a chronic condition, affecting 26 million people worldwide. Despite its prevalence, HF is poorly understood by many people, and often goes unrecognised by healthcare professionals. HF Awareness Day is held in May every year, with the aim of raising the condition’s profile. Evidence shows that across Europe, only 3% of people can correctly identify the symptoms of HF.

The Heart Failure Policy Network is a multidisciplinary European group working with patients, health professionals and other stakeholders to lead significant policy changes that may improve the lives of people with HF. The Health Policy Partnership acts as secretariat for the network. For more information on the network and its activities, please see the Heart Failure Policy Network website