20 MEPs have initiated a new Written Declaration on Heart Failure in the European Parliament, one of most significant dedicated policy actions in Europe yet initiated for this costly and prevalent condition. 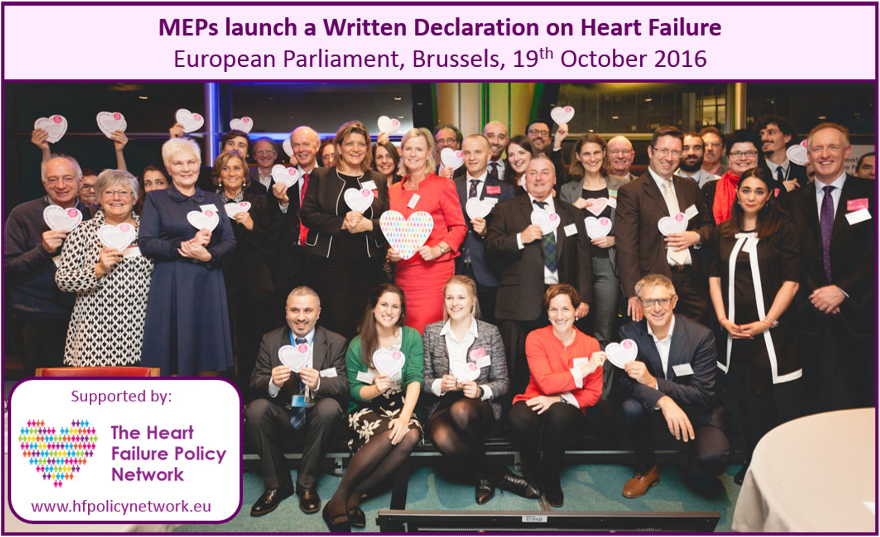 Supporting MEPs gathered with patient representatives and expert figures from all over Europe to show their support for the Declaration, and to discuss the urgent challenges this condition poses to health systems in Europe.

Under European Union rules, Members of the European Parliament (MEPs) can pass formal Written Declarations on specific topics through the Parliament provided at least half of all MEPs agree to sign it, following which the Declaration is endorsed and officially raised with the European Commission. Written Declarations often result in specific actions on the part of the Commission, and many raise considerable awareness of their given topics amongst decision makers at both European and national levels.

The Heart Failure Policy Network worked closely with initiator and parliamentary host MEP Annie Schreijer Pierik (Netherlands, EPP) to bring together an informative and interactive event to fire the starting gun on a five month joint campaign by initiating MEPs, the Network, and many other supporters across Europe. All parties will be working to secure the requisite support and signatories to the Declaration in the European Parliament.

The event was attended by representatives of over 18 European and national organisations from patient advocacy, NGO sector, professional societies, and other policy commentators.

Heart failure is a highly prevalent and costly condition, and one of the few cardiovascular diseases on the rise. To date, however, few governments have afford it much priority or dedicated policy focus. The Written Declaration will be formally tabled in early November 2016, and will request that the European Commission ensure the EU plays a more engaged and supportive role in driving a coherent, strategic European response to heart failure. Notably the Commission will be asked to:

For more information on the Network, the Written Declaration, and our research and policy engagement activities, please click here.

The Heart Failure Policy Network is an independent, multidisciplinary group of politicians, patients, healthcare professionals and other stakeholders from across Europe whose goal is to raise awareness of the unmet needs surrounding heart failure and its care.

All members provide their time for free, and all content produced is fully endorsed and owned by the members of the Network.
The Network is supported through grants from Novartis Pharma and St Jude Medical.